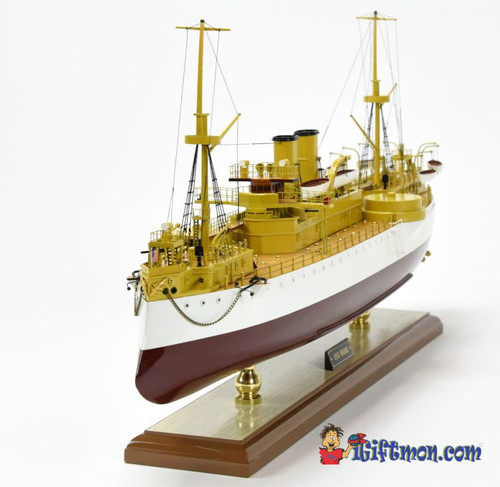 USS Maine (ACR-1) was an American naval ship that sank in Havana Harbor during the Cuban revolt against Spain, an event that became a major political issue in the United States.

Commissioned in 1895, this was the first United States Navy ship to be named after the state of Maine. Originally classified as an armored cruiser, she was built in response to the Brazilian battleship Riachuelo and the increase of naval forces in Latin America. Maine and her near-sister ship Texas reflected the latest European naval developments, with the layout of her main armament resembling that of the British ironclad Inflexible and comparable Italian ships. Her two gun turrets were staggered en échelon, rather than on the centerline, with the fore gun sponsoned out on the starboard side of the ship and the aft gun on the port side, with cutaways in the superstructure to allow both to fire ahead, astern or across her deck. She dispensed with full masts thanks to the increased reliability of steam engines by the time of her construction.

Despite these advances, Maine was out of date by the time she entered service, due to her protracted construction period and changes in the role of ships of her type, naval tactics and technology. It took nine years to complete, and nearly three years for the armor plating alone. The general use of steel in warship construction precluded the use of ramming without danger to the attacking vessel. The potential for blast damage from firing end on or cross-deck discouraged en échelon gun placement. The changing role of the armored cruiser from a small, heavily armored substitute for the battleship to a fast, lightly armored commerce raider also hastened her obsolescence. Despite these disadvantages, Maine was seen as an advance in American warship design.

Maine is best known for having been lost in Havana Harbor on the evening of 15 February 1898. Sent to protect U.S. interests during the Cuban revolt against Spain, she blew up without warning and quickly sank, killing nearly three quarters of her crew. The cause of her sinking and the identity of those who were responsible remained unclear after a board of inquiry investigated. Nevertheless, popular opinion in the U.S., fanned by inflammatory articles printed in the “yellow press” by William Randolph Hearst and Joseph Pulitzer, blamed Spain. The phrase, “Remember the Maine! To hell with Spain!”, became a rallying cry for action, which came with the Spanish–American War later that year. While the sinking of Maine was not a direct cause for action, it served as a catalyst, accelerating the approach to a diplomatic impasse between the U.S. and Spain.

The cause of Maine’s sinking remains a subject of speculation. In 1898, an investigation of the explosion was carried out by a naval board appointed under the McKinley Administration. The consensus of the board was that Maine was destroyed by an external explosion from a mine. However, the validity of this investigation has been challenged. George W. Melville, a chief engineer in the Navy, proposed that a more likely cause for the sinking was from a magazine explosion within the vessel. The Navy’s leading ordnance expert, Philip R. Alger, took this theory further by suggesting that the magazines were ignited by a spontaneous fire in a coal bunker. The coal used in Maine was bituminous coal, which is known for releasing firedamp, a gas that is prone to spontaneous explosions. There is stronger evidence that the explosion of Maine was caused by an internal coal fire which ignited the magazines. This was a likely cause of the explosion, rather than the initial hypothesis of a mine. The ship lay at the bottom of the harbor until 1911. A cofferdam was then built around the wreck. The hull was patched up until the ship was afloat, then towed to sea and sunk. Maine now lies on the sea-bed 3,600 feet (1,100 m) below the surface.

Our model of the USS MAINE is 100% handcrafted by artisans from scratch, using high-grade woods such as rosewood, mahogany, teak, and other exotic woods. The model required hundreds of hour to complete by skillful and creative master craftsmen. It is built using all the finest materials and metal fittings to build the model. Our model was built according to scale through original plans, pictures and drawings. This model comes ready to be display on a wood-base.

NOW IS YOUR CHANCE TO OWN A BEAUTIFUL MUSEUM QUALITY PIECE OF MARITIME HISTORY AT GREAT SAVINGS!!!